Poems That Make Grown Women Cry : 100 Women on the Words That Move Them 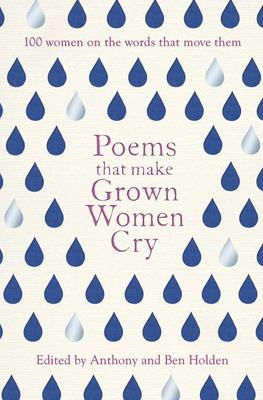 Poems That Make Grown Women Cry : 100 Women on the Words That Move Them

Following the success of their anthology Poems That Make Grown Men Cry, father-and-son team Anthony and Ben Holden, working with Amnesty International, have asked the same revealing question of 100 remarkable women. What poem has moved you to tears? The poems chosen range from the eighth century to today, from Rumi and Shakespeare to Sylvia Plath, W. H. Auden to Carol Ann Duffy, Pablo Neruda and Derek Walcott to Imtiaz Dharker and Warsan Shire. Their themes range from love and loss, through mortality and mystery, war and peace, to the beauty and variety of nature. From Yoko Ono to Judi Dench, Chimamanda Ngozi Adichie to Elena Ferrante, Carol Ann Duffy to Meera Syal, and Joan Baez to Olivia Colman, this unique collection delivers private insights into the minds of women whose writing, acting and thinking are admired around the world.

Anthony Holden is an award-winning journalist who has published more than 30 books, including biographies of Laurence Olivier, Tchaikovsky and Shakespeare. He has published translations of opera, ancient Greek plays and poetry. His son Ben is a writer and film producer. He was director of European Film and Television at Exclusive Media, where he helped relaunch Britain's most famous film production label, Hammer. Anthony and Ben both live in London. Ben Holden is a writer and film producer. He lives in London and studied English at Merton College, Oxford. With his father Anthony, Ben edited the bestselling Poems That Make Grown Men Cry and Poems That Make Grown Women Cry.