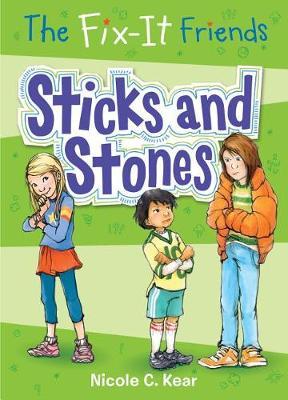 Because words can hurt you too. Noah's the quiet type, which makes him a great friend for Veronica. She chats. He listens. She gabs. He nods. Perfect!So when Veronica spots Noah getting teased, she decides that if he won't speak up for himself, she will! What she doesn't expect is that the teasing will turn on her -- and her sense of style. Veronica's so embarrassed that she agrees to a mega Makeover from Cora, the Queen of Cute. When this only makes the name-calling worse, Veronica and Noah know just who to call for back-up: the one-and-only problem-solving team, the Fix-It Friends!The second adventure in The Fix-It Friends chapter book series anchors humor with lots of heart, as the group learns to deal with teasing and bullying.Includes a toolbox of expert advice on how to handle teasing!An Imprint Book

Nicole C. Kear is the author of the chapter book series The Fix-It Friends and the memoir Now I See You, chosen as a Must-Read by People, Martha Stewart Living, Parade, Redbook, and Marie Claire UK among others. Her essays have appeared in the New York Times, Good Housekeeping, New York, Psychology Today, and Parents as well as on Salon, the Huffington Post, and xoJane. She teaches writing at the NYU School of Professional Studies. A native of New York, she received a BA from Yale, a MA from Columbia, and a red nose from the San Francisco School of Circus Arts. She lives in Brooklyn with her husband, three children, and two albino frogs.Tracy Dockray illustrated the paperback cover of Lois Lowry's Stay, a dog's tale about his life, and a picture book, Izzy & Oscar, a story about a more unusual kind of pet. Tracy has illustrated numerous other picture books such as The Tushy Book and the prize winning Lost and Found Pony, as well as an edition of Beverly Cleary's Ramona series, Ralph the Mouse series, Henry Huggins series, and The Fix-It Friends series.